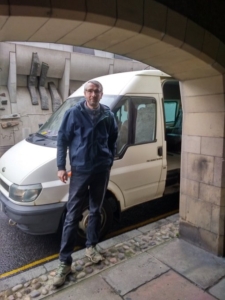 I met Peter Krykant outside the Scottish Parliament. Peter runs the safe consumption van in Glasgow. This enables drug users to take their drugs in a safer method than out in the streets. Peter brought his van to the Scottish Parliament to highlight the appalling drugs deaths in Scotland, which is a much worse than the overall UK drugs death rate.

People who are addicted with Class A drugs have often had significant adverse life experiences, such as abuse, neglect, and bereavement. Drugs are used as a coping mechanism to deal with emotional pain. Often, many drug users have grown up in poverty, which can affect their self-esteem and relationships.

Our brains have a reward system, so when we have a rewarding experience our brains send chemical messages which stimulate neurons in the brain. The main neurotransmitter within the reward system is known as dopamine. When lots of dopamine is released, we experience pleasure and are motivated to the same activity which causes pleasure.

Addiction occurs because the brain becomes conditioned to wanting more and more of the activity to trigger the reward system. There is evidence that some people are genetically predisposed to become addicted to illegal drugs, alcohol or other addictions. Being impulsive is one component of being addicted.

The first stage of recovery is recognising that you have a problem with drugs. This can include causing huge financial problems and neglecting your health and other parts of your life. Hypnosis and hypnotherapy operate at the subconscious level. The benefit of this is that it can change underlying thoughts about drug use.

Hypnotherapy involves making positive suggestions to the subconscious mind. This may include making positive suggestions for managing stress, if drugs are being used as a relief for managing stress. It may be that a particular trigger set off a drug addiction. Hypnotherapy can help deal with such triggers and assistant with altering your feelings and behaviours around drug use. If you are concerned about your drug use, get in touch and find out more about hypnotherapy and how it can help you.